In the world of (mostly) solvable problems in which we live, therein lies some basic strategies in which the logical thinker can approach a strategy for a potential solution. Traditionally, the four core skills of Computational Thinking (CT) are:

Thinking EVALUATIVELY
Thinking CONCURRENTLY
Thinking AHEAD
Thinking LOGICALLY
Though these skills have been recognised within problem solvers since problems existed to be solved, the term Computational Thinking was coined by one Seymour Papert (the inventor of Logo) in 1980 in a book called 'Mindstorms' (a name which may be familiar to lovers of Lego).

“Computational Thinking is borne out of curiosity.
It is difficult to teach. Our role as educators is to provide the
framework to facilitate its development.”
Mark Mills 2016 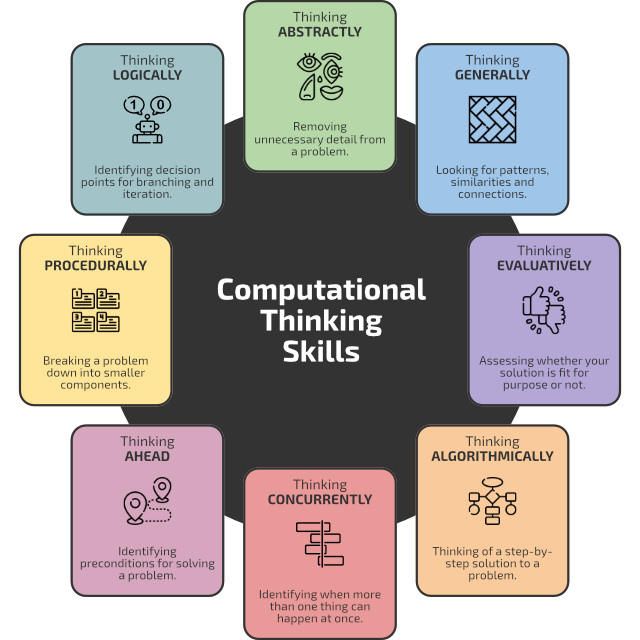 Computational Thinking Skills
More recently, one of the most well-known protagonists of CT has been Jeanette Wing formally of Microsoft Research, expressing the algorithmic problem-solving and abstraction techniques used by computer scientists and how they might be applied in other disciplines.

Free for your classroom!

Here is a free set of posters outlining the basic skills involved in CT for your classroom or lab. They are A4 in size but can be blown up onto A3 should you require it! It's a pleasure 😃

YouTube Video
In this playlist, I have compiled some notable YouTube videos which demonstrate some of the ideas in CT. I don't think that the audience for these is necessarily students but they may provide some insight into the mind of the logical problem solver.
WWW Links
🌐
Computational thinking - Wikipedia
en.wikipedia.org
In education, computational thinking (CT) is a set of problem-solving methods that involve expressing problems and their solutions in ways that a computer could also execute.
🌐
Jeannette Wing - Wikipedia
en.wikipedia.org
Jeannette Marie Wing is Avanessians Director of the Data Science Institute at Columbia University, where she is also a professor of computer science.
🌐
Logo (programming language) - Wikipedia
en.wikipedia.org
Logo is an educational programming language, designed in 1967 by Wally Feurzeig, Seymour Papert, and Cynthia Solomon.
🌐
Mindstorms
mindstorms.media.mit.edu
Seymour Papert’s Mindstorms was published by Basic Books in 1980, and outlines his vision of children using computers as instruments for learning.
🌐
Seymour Papert - Wikipedia
en.wikipedia.org
Seymour Aubrey Papert was a South African-born American mathematician, computer scientist, and educator, who spent most of his career teaching and researching at MIT.
Last modified: October 15th, 2021
The Computing Café works best in landscape mode.
Rotate your device.